The NSW Minister for Planning and Infrastructure (not North Sydney Council) has the power to accept or reject the Application.

2. Misrepresentation of residents by Luna Park
Luna Park, as we know it, is an important part of the Lavender Bay ambience.
Along with the Opera House and the Harbour Bridge, the much-loved amusement park is a Sydney icon and viewed as such by Milsons Point residents.

The clear intention was that this area of land be green space. Indeed, Luna Park recognising this intention named it Lavender Green.

The Government was asked in 2017 to advise why it allowed the “rigid marquee” to be erected and then remain. It advised :
We have inspected the marquee on Lavender Green. It is not strictly speaking a permanent structure as it appears to be a removable gazebo albeit bolted to the ground.

The view is questionable – see 7 below for more.

6. Role of Lavender Green in the operation of Luna Park
The Statement of Environmental Effects states the functionality of Lavender Green within Luna Park is primarily a children’s and family area and accommodates minor rides, marquees, and activities such as a petting zoo and inflatables.
• This is incorrect.

Lavender Green is predominantly used by Luna Park as a prestigious events venue.
In October 2017, following the establishment of the “rigid marquee” structure, Luna Park promoted Lavender Green as an updated outdoor venue positioned as a prestigious events and venue host.
An article titled “Luna Park Sydney reveals updated outdoor venue”, published in the Australasian Management Magazine on 20 October 2017, advised
“… Sydney’s Luna Park Venues has unveiled a new look for its outdoor venue, Lavender Green, in advance of the summer months…
The multi-purpose venue can be used to host a wide range of activities and functions including outdoor BBQ style parties, family days, lunches or outdoor cocktail events. The updated venue space now has the capacity to cater for 1000-guest cocktail events, while the capacity of the marquee is 600 guests standing and 250-300 for a seated buffet.
Source: https://www.ausleisure.com.au/news/luna-park-sydney-reveals-updated-outdoor-venue

Luna Park promotes Lavender Green on its website as a corporate and social venue.
Source: https://lunaparkvenues.com/product/corporate-lavender-green/

7. State Environmental Planning Policy (State Significant Precincts) – removal of planning controls in Luna Park
In 2017, Multiplex’s Luna Park argued that, unlike everyone else in NSW, Luna Park should not have to comply with the planning laws.
• The NSW Government disagreed.
• Multiplex’s Luna Park took the NSW Government to the Land & Environment Court claiming it was not required to obtain a construction certificate for any building or structure it wished to construct.
• The Court dismissed the claim and awarded costs against Multiplex.

Inexplicably, the then NSW Planning Minister, The Hon Anthony Roberts MP (with the support of our local state member), announced the NSW Government would amend the law to reverse its victory in Court.

So, there you have it. The Planning Minister, having won the case moved to change the law to negate the victory.

An internet search has revealed that Luna Park has procured a rollercoaster – an SC2000 Coaster.
Source:. https://www.pittsh.com.au/case-study/luna-park-sydney-spinning-coaster-design-verification/
Also, recent markings in Maloneys Corner (the area between Coney Island and Lavender Green) indicate that a survey of underground services, including electrical, communications, storm water etc has been undertaken.
• Why?

If Luna Park’s intention is to install a rollercoaster in Maloney’s Corner, is the motive for this Development Application the relocation of the Children’s Rides from Maloney’s Corner to Lavender Green?

Lavender Bay is surrounded by the densely populated residential areas of Milsons Point, Lavender Bay and McMahons Point. If approved, this Development Application would have a significant impact on the amenity of thousands of residents.

It is notable, in this regard, that the 1995 decision by Hodgson J in the case of SEIDLER and Ors v LUNA PARK RESERVE TRUST and Anor made the statement that “…the area [i.e., in the neighbourhood of Luna Park] is now, to a significant extent, a residential area, and is becoming more so; and that it should not be assumed that Luna Park would be allowed to operate in ways that unreasonably interfere with the residential amenity of the area…”.

10. NSW Government Policy and green space
In April 2018, the NSW Government, recognising the importance of green space announced that it was investing in more green open space in Sydney and announced the dedication of $290m for this purpose. Premier Gladys Berejiklian said, “… We appreciate that local communities just don’t need the transport links and schools and hospitals, they also want livability. They want the open space… We are looking at every single suburb across greater Sydney — wherever there’s an opportunity for us to acquire a piece of land…”

Alienating parkland in the context of
• Premier Berejiklian’s stated objective of securing green space wherever there’s an opportunity; and
• in one of the most densely populated areas of Sydney with a demonstrable shortage of green space
is both irresponsible and bad public policy.

Returning Lavender Green to public green space and securing its future as green space would be good public policy and one step towards redressing the increasing shortage of green space in North Sydney, one of the most urbanised local government areas in Australia.

It would also help to compensate for the inevitable loss of green space due to the Western Harbour Tunnel and Warringah Freeway Upgrade project.

The closing date for submissions is 7 May 2020 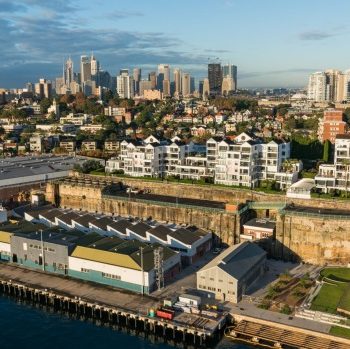