Newsletter 30 – Luna Park – Is it a case of Regulator Capture?

Luna Park’s ghost train’s fire provids the basis for a rethink of how Luna Park could continue to be one of Sydney’s icons.

It was back in 1998 that every conceivable Luna Park stakeholder came together and signed-off on a Plan of Management for Luna Park.

The messages from two of those stakeholders:

The Premier announced that the NSW Liberals & Nationals Government will never sell off the land (railway corridor between Waverton (Berrys Bay) and Lavender Bay) and ensure it remains a community asset in the event it is not needed for railway use.

“Selling” off is a hallmark of the management of Luna Park

Luna Park Sydney then set about reducing the site by “selling”:

Special Treatment that transfers value from the community to Luna Park

In 1995 the noise from the newly installed big dipper became an issue. The Community mounted an action aimed to securing compliance with the laws relating to noise.

In that action the presiding judge said:

… I also accept that the area is now to a significant extent a residential area, and is becoming more so; and that it should not be assumed that Luna Park would be allowed to operate in ways that unreasonably interfere with the residential amenity of the area…

The outcome was that the park closed.

In 2005, following reopening of the park:

The Department of Planning & Environment Assessment (the Department) gave notice of intention to seek the demolition and removal of the ride, and its associated structures, fixtures and fittings.

On 10 November 2014 Luna Park lodged Development Application DA 6800 (“DA 6800”) seeking approval for the ongoing use of the “Hair Raiser” ride at the Park. On 1 June 2015, DA 6800 was referred to and approved by the Planning Assessment Commission under Ministerial Delegation.

To date, there is still no Development Application or approval for the erection of this ride.

For future rides where development consent is required, the Department will publicly exhibit any development application of this nature, and residents will be invited to make public submissions.

In November 2016, the Department of Planning issued an order requiring Luna Park to submit a compliance report relating to the lighting requirement of its Development Consents. Luna Park responded in the Land & Environment Court claiming consent conditions don’t apply after construction and the Minister’s order oversteps the mark.

In July 2018, the Court dismissed the proceedings and awarded costs against Multiplex.

In October 2018, following a direct request from Luna Park, the Minister for Planning, launched a process to relax planning controls through categories of exempt and complying development within Luna Park. The Minister, following advocacy from Ms Felicity Wilson, local state member and against the judgement of the court and the wishes of residents, hastily approved the SEPP in early December 2018.

The SEPP made Luna Park Pty Ltd the consent authority.

2.4 The Government misled the public in favour of Luna Park

The Department of Planning and the Independent Planning Commission advised the SEPP provided a pathway for low impact rides which would have minimal impact on residents.

The NSW Government in its Media Release announcing the SEPP indicated that the new rides would have minimal impact.

Rides and amusements with minimal impacts would be deemed exempt development and would not require development approval before they are installed, modified or removed; while a council or accredited certifier could approve the installation, modification or removal of rides and amusements, if they comply with specific development criteria, under a streamlined approvals process.

Luna Park has introduced 9 new rides under the SEPP; 3 thrill rides and 6 children’s rides. The thrill rides include: 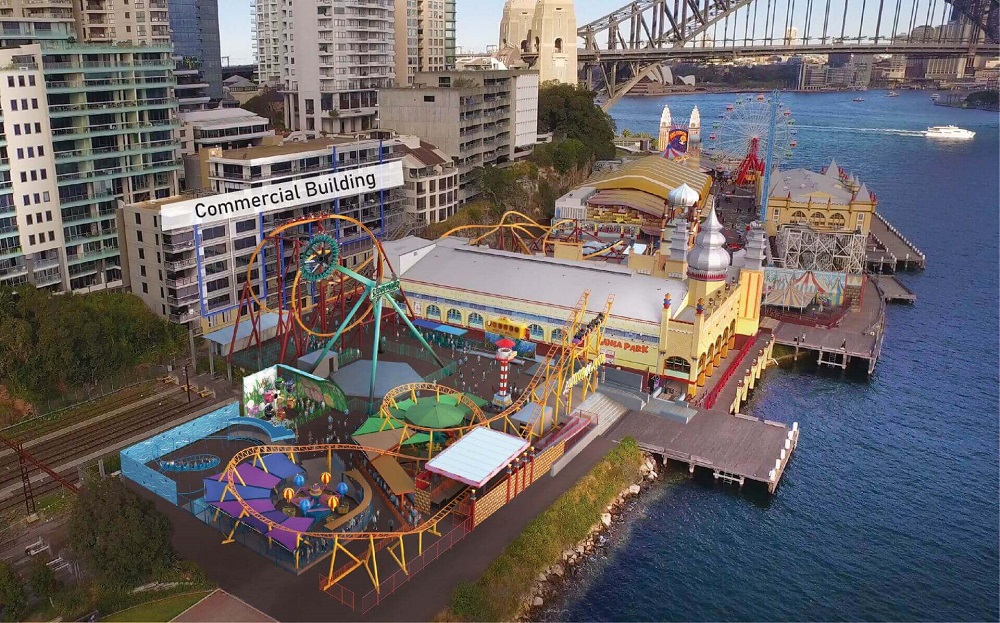 These 3 thrill rides will have significant socially unacceptable impact on some 10,000 residents around Lavender Bay and are certainly not low impact rides as advised by the Department of Planning and the Independent Planning Commission.

The benefits to Multiplex included

Questions to the NSW Government (F Wilson and the Premier)

Given the decisions Re Sydney Harbour Collieries 1895 and the Gloucester Resources v Minister for Planning 2019 that held:

it was a governmental “duty” to take the “greatest care to protect” public interests. The Court held that the government should prevent exploitation of the public domain concluded that the natural beauty of the harbour exceeded “monetary value” the notion of the public trust doctrine and the importance of its operation

will the Government reconsider the SEPP with a view to having it withdrawn. If not, will you help me understand the basis upon which the Government concluded the duty was discharged?

Will the Government make the future clear: