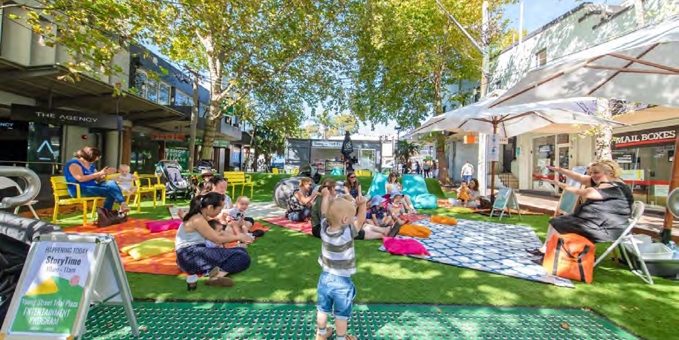 Newsletter 43 –  Young St Plaza -Why It Should Be Returned

A block of six who voted to get rid of the plaza comprise:

I’ve joined with Jilly Gibson to bring the proposal back to the Council for reconsideration (a recission motion).

Councillors Spenceley and A Drummond supports the recission motion.

Councillor Drummond has strong views which I share. They appear below.

I am passionate about retaining this valuable space for our community.

As a lifetime nearby resident, I can confidently say that we have waited too long for Neutral Bay to be improved. Our most recent community consultation showed that public open space is our highest priority in Neutral Bay (70% of respondents). Despite the fact that many candidates advocated for public open space during the recent election campaign, I was shocked to see a bloc vote of 6 against this proposal. The arguments presented against the project simply do not stack up and the community consultation shows 3:1 support for the project. In alignment with democratic processes we should be making decisions based on majority support, backed by sound planning and data. All of these are outlined below.

I acknowledge that new Councillors were asked to make a decision on the Plaza before having seen the detailed reports submitted during the past term, including a 250-page traffic study over multiple time periods (including pre-covid), a human movement study and several detailed community feedback studies. That is why we are bringing this project back for a second time, so that fellow Councillors may this time make a fully informed decision based on facts, not anecdotes. In my opinion, some have been given inaccurate, exaggerated or misleading information that has unduly swayed their view of this project and led them to ignore the majority support of our community for the Plaza.

Given the Neutral Bay Plaza was fully approved last year, our community have been quietly waiting for the permanent Plaza to be built. I do not believe that our community felt it necessary to lobby their local Councillors about the Plaza as it had already been endorsed. Hence the decision to cancel the Plaza has been so confusing for so many residents.

I have summarised below my own views on the benefits of the Plaza. I have also included a breakdown of various criticisms of the Young Street Plaza that I believe to be untrue, based on my knowledge of the project.

Why should we keep Young Street Plaza?

• Better public transport flow (less cars slowing to turn left across Military Rd bus lane)
• Safer pedestrian movement (less roads to cross – particularly important for our elderly, young children, vision impaired, disabled, reduced mobility…)
• Free place to gather (cafes are only other alternative, obligation to spend money)
• Only sunny public open space on Neutral Bay North military road corridor (only alternatives are benches in the carpark, or children’s playground)
• Our community wants it!! (3:1 community support for the Plaza in public consultation – surely we need to listen to what our community say? Isn’t that the point of community consultation?)
• Most negative comments about the plaza relate to aesthetics, but this has all been addressed in the permanent design. The current temporary Plaza was built to have a short lifespan, 3 months, using materials that can be upcycled in other locations for sustainability. To enable longer community consultation, the trial period was extended (through the La Nina summer rains). It has now been there for over 18mths, coming up to 2years, and so looks tired, but the permanent construction will be high quality with durable materials.
• The Plaza includes a lot of new trees. And for anyone who is concerned by astro turf or paving (designed-in for durability) we can make it greener! More lawn, more plants, why not?

There are many excuses being thrown around by a vocal minority who are calling for the Plaza to be removed. These claims are misguided at best, and misleading at worst. As an informed Councillor who has been at every information session related to this plaza, on the past and current Councils, and read all our detailed planning documents, I call out the below misinformation:

Firstly, some people are suggesting that we can simply divert the funds elsewhere, to another “better” project in the area. Apart from the fact that the State Government funding deed states clearly that this is not an option, even if it were an option, it would take years and hundreds of thousands of dollars to redesign, develop, consult and fund another such plaza. And why would we do that when we have the Young Street Plaza designed, funded, approved and shovel ready NOW? To throw out such an advanced project is wasteful to say the least. Why would we not just tweak it so that we are all satisfied with the outcome? For the record, other surrounding streets such as Waters Road were analysed early in the process and discounted for multiple reasons including their significantly higher traffic flow.

Secondly, some people are incorrectly suggesting that Young Street Plaza could restrict our ability to create the Grosvenor (Woolworths carpark) Plaza in the future. Or that it is somehow “one or the other”. This is simply not true; the two projects are entirely independent of one another. We can have both. Why would we not aim for both??? Let’s keep the Young Street Plaza and use it to gain momentum for the Grosvenor Plaza! Let’s make Neutral Bay a series of plazas and parks! Sure, we can delay, again, and wait for the “bigger picture planning” before building Young Street Plaza, but by then we won’t have the State funds to build it, so it is a moot point.

For the record, re-opening the Young Street Plaza will not fix the “Woolworths Truck problem”. The Grosvenor Woolworths loading zone is notoriously bad. Everyone has watched the Woolworths trucks do 10 point turns to get into the narrow carpark driveway. What will solve the Woolworths truck issue is the redevelopment of the Coles/Woolworths site so that the loading is correctly placed on the wider Grosvenor Street. All traffic studies over multiple years point to this solution. When this happens, the correct traffic flow will be along Ben Boyd Road, then Grosvenor Street – which the Young Street Plaza supports and enables.

Public open space is hard to get, and hard to fund. The Young Street Plaza is ~700sqm. Some say this is too small, but by comparison, our upcoming Hume Street Park expansion project adds approximately the same, ~800sqm (stage 1). That project has taken 10 years to acquire land / design / plan / fund and stage 1 is costing $16m of ratepayer money (plus $3.5m of State grant money). By comparison, the Young Street Plaza is costing $1.9m (in addition to the initial ~$500k that included surrounding infrastructure upgrade repaving the footpaths, drainage and lighting – all permanent work), is fully funded by the State Government and has taken 4 years. That is a great example of creative, successful public open space planning.

Thirdly, some people are suggesting that there have been adverse traffic impacts as a result of Young Street Plaza, or that there were no traffic studies completed (during regular traffic periods). The plaza is supported by ample traffic flow data during normal traffic flow, prior to covid, and the rerouting of traffic has been accommodated comfortably over the past years. Single negative traffic incidents have been exaggerated and claimed to reflect regular traffic flow. One car speeding or one truck taking a wrong turn does not reflect the status quo. It is easy to find singular negative examples; we need to focus on the overall context, which is a safe, pedestrianised zone in the heart of Neutral Bay that has full solar access to the North.

Some are concerned by Astro Turf in the current design. It was chosen for durability but can be easily swapped out for natural grass.

Some people say traffic has increased down Grosvenor Lane shared zone. There are mixed views on this, but we have control of that shared zone so let’s make it residential traffic only.

Some are concerned by the container/café. It was added simply for optionality (community usage) but is non-essential and easy to remove from the scheme.

Some are concerned about talk of a ‘road’ running through the Plaza. For the record, there is no internal road – there is a level, emergency vehicle access way to enable emergency access if required (like we do with all public spaces, including parks). At all other times this will be blocked with bollards and that space forms part of the level plaza, for public pedestrian use. 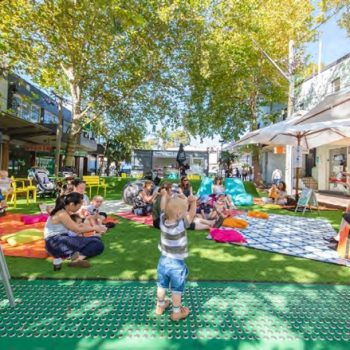 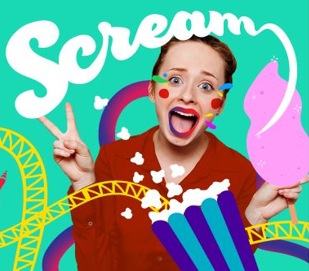